India haven t matched expectations as far as their overseas performance this year.

Virat Kohli-led Team India followed up a dismal overseas Test outing in England with a thumping innings and 272-run win against a listless West Indies side in the first Test at Rajkot that witnessed a result in three days.

India haven t matched expectations as far as their overseas performance this year goes despite head coach Ravi Shastri terming his bunch of players as the best travelling side than their predecessors over the past 15-20 years. India lost the three-Test series in South Africa 2-1 and went on to lose the five-match Test series in England 1-4.

With another Test still left against the West Indies on October 12 at Hyderabad and the most awaited four Test matches lined up in Australia later this year, the BCCI s Committee of Administrators (CoA) will hold the Indian team s performance appraisal to take stock of the situation.

According to a report in The Indian Express on Sunday, the meeting is scheduled to be held on October 10 and 11 before the second Test against West Indies.

The CoA will have a discussion with the team management. It s stock-taking of the team s tours of South Africa, England and Dubai [for the Asia Cup]. This is a performance analysis meeting of the overseas tours. Captain Virat Kohli, vice-captain Ajinkya Rahane, head coach Ravi Shastri will be there. Chief selector MSK Prasad, too, will be present, a source was quoted as saying in the report.

The CoA has taken note of the Indian team s performance this year, specially overseas and communicated to the head coach that performances in the series at England were unacceptable .

With the series against Australia Down Under this year being the last chance for Kohli-led India to prove that they can match their superior home form with success in away conditions as well, the performance appraisal meeting should hold the team and management in good stead. 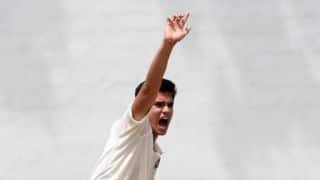