Chatara, who last played a Test in November 2018, was named in the provisional squad for the two-match series.

Fast-bowler Tendai Chatara has been ruled out of Zimbabwe’s upcoming home Test series against Sri Lanka after he failed to recover from a bicep injury. The 28-year-old suffered the injury during a recent domestic match.

Chatara, who last played a Test in November 2018, was named in the provisional squad for the two-match series. Chatara’s absence will throw open the doors to uncapped pacers Victor Nyauchi and Charlton Tshuma to make their Test debut.

The squad, led by Sean Williams, will have five debutants. Apart from the return of Brendan Taylor, Craig Ervine, Sikandar Raza, Kyle Jarvis and Regis Chakabva (who will be returning to Test cricket after more than a year), the selectors have also recalled Carl Mumba who had been out of international cricket since sustaining a knee injury against Sri Lanka in 2017.

For the visitors, Suranga Lakmal made a comeback to the squad after he missed out on the tour of Pakistan due to dengue fever. The Lankan Side lost the recently concluded two-Test match series against Pakistan 1-0. Lakmal has been Sri Lanka’s main bowler in the away Test series over the years. He played 59 Tests and scalped 141 wickets with an average of 39.00.

The two-Test series, with both matches set to be held in Harare, will begin on January 19. 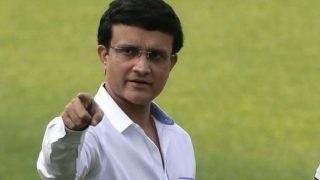 Sourav Ganguly Tweets Inspirational Message for Virat Kohli and Co. Ahead of 2nd ODI Against Australia