West Indian fast bowler Ravi Rampaul, who broke millions of hearts by dismissing Sachin Tendulkar just six short of his 100th international century, said getting the wicket of the Indian batting maestro was special and the feat was achieved with some good planning. 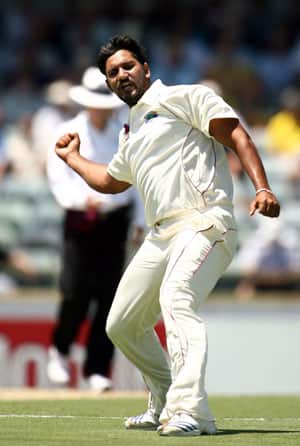 West Indian fast bowler Ravi Rampaul, who broke millions of hearts by dismissing Sachin Tendulkar just six short of his 100th international century, said getting the wicket of the Indian batting maestro was special and the feat was achieved with some good planning.

“Leading up to this morning, the coach and I had a chat during warm-ups about how I am going to bowl at him. Best way is to get close to the wicket and angle the ball away from him and he nicks it. It’s a good feeling. The ball bounced a lot.

He was batting out of his crease to get the ball a little fuller. I realised that and altered my length. It was just a right ball at the right time,” said Rampaul.

Tendulkar was caught at second slip by West Indian captain Darren Sammy while attempting an off-side shot off Rampaul on the fourth day of the third cricket Test at the Wankhede Stadium on Friday.

In a lighter vein, the player whose ancestors are from Kolkata – conceded that he was made to feel like a villain by spectators for getting Tendulkar out while he was fielding in the deep.

“Yeah, I got that as soon as Sachin went. I went back to the boundary and all that time I was heckled. That’s life you know. A lot of fans had their hearts broken but we can’t just let him go there and let him live freely. We have a job to do,” said the 27-year-old Trinidadian, who also accounted for opener Gautam Gambhir and centurion R Ashwin in taking a creditable 3 for 95.

Rampaul did not agree to a suggestion that his side had relaxed after getting the quick wickets of VVS Laxman, Tendulkar, and India captain M S Dhoni and credited R Ashwin and Virat Kohli, who added 97 runs for the seventh wicket to help India cross the follow-on mark, for playing well.

“They (Ashwin and Kohli) batted well. Ashwin came out and assessed the wicket and batted according to the conditions.

While their partnership was on, we tried to restrict runs and create pressure hoping that one of them gets out. The wicket is not such that you can plot out someone or you can spin out someone. You have to stick to a basic line and length and team plan.

“I don’t think we relaxed. The wicket is a good wicket.

When their partnership was going on, we reworked our plans and tried to be as consistent in our line and length hoping that they would give us a chance. Kohli gave us that chance and we took it,” he added.

Off-spinner Ashwin achieved a rare feat today by becoming only the third Indian cricketer to score a century (103) and take five wickets (5/156) in an innings in a Test match.

Stating that there were still chances of a possible result, Rampaul said the West Indies would take a call on declaration based on the start they get in the morning.

“Yeah we think so (a result is possible), according to how India bowl and how we bat. We are taking it step by step.

It’s too long now. Coming tomorrow we hope to have a good start and look it from there. The wicket is still good for batting. There is not much for bowlers. We will see tomorrow how it shapes up and see from there,” he said. (PTI)