Tendulkar must get 100th ton before Australia series: Shastri

Tendulkar must get 100th ton before Australia series: Shastri

"Yes, Sachin will need to get rid of it before he heads for the all important series Down Under. He should atleast play in the first three ODIs and complete the milestone," former India captain Ravi Shastri said after Sachin Tendulkar missed out on scoring his hundredth ton yet again on Friday. 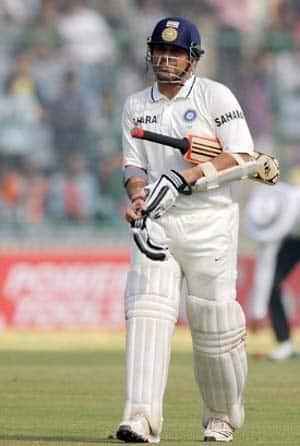 Sachin Tendulkar last hit a century in any form of the game on March 12, 2011 in Nagpur against South Africa in the World Cup. Eight months since, the wait for the landmark 100th ton is still on.

“He should quickly get the monkey off his back,” said former India player Sanjay Manjrekar, who is commentating on the Test series between India and the West Indies.

“It will be good for the team if he plays in the ODI series against West Indies and scores a century because we need a confident Tendulkar for the Australia tour,” he said while talking to compatriot Ravi Shastri at the other end.

“The monkey has grown into a gorilla now,” Shastri retorted in a lighter vein.

“Yes, Sachin will need to get rid of it before he heads for the all important series Down Under. He should atleast play in the first three ODIs and complete the milestone.”

Tendulkar will have the chance to accomplish the feat at home, before the Australia tour, if he chooses to play against West Indies in the One day series.

The batting maestro came as close to the milestone as he ever has, reaching 94 on the fourth day of the third and final Test against West Indies at the Wankhede Friday. However he once again succumbed to the nervous nineties, getting out to Ravi Rampaul edging the ball to second slip Darren Sammy.

After his 99th century, Tendulkar played in four ODIs in World Cup. He has not played an ODI since the World Cup final against Sri Lanka in Mumbai. He pulled out of the ODI series in the away tours of the West Indies and England.

He played four Tests in England and three against the West Indies at home. He is without a century in 12 Test innings. He came close in the Oval Test match, scoring 91. (IANS)

Will Harbhajan Singh be considered for Australia tour?