Tendulkar went to his century off 103 balls his second fifty had taken just 37 balls with a glanced boundary off Bresnan and was received with ecstatic applause. That was followed by another six off Swann and two leg-side fours played to perfection. 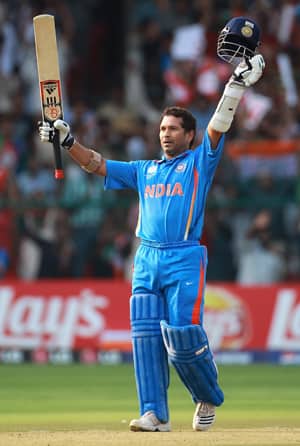 That Sachin Tendulkar made a century was not unusual – it was his 47th in One-Day Internationals – but this innings was unusual because it was just his second against England. He started circumspectly – his first boundary came off his 24th ball – before racing onwards with a calculated assault on Graeme Swann and Paul Collingwood, hitting the pair for five sixes. His awesome 120 a record fifth in World Cups – was complimented by 51 from Gautam Gambhir and a breezy 58 from Yuvraj Singh, allowing India to post a mammoth 339 after they won the toss. For England, Tim Bresnan s five for 48 were in stark contrast to their spearhead, James Anderson, who bled 92 off 9.5 overs, the most by an Englishman in World Cups.

Rapturously received, Tendulkar did not disappoint his admirers. With Virender Sehwag starting with a bang, Tendulkar played the waiting game his first four didn t come until the ninth over when he twice twirled Anderson for fours and his third in the 17th when he decided Swann was the man to attack. Tendulkar s game plan was evident, and he executed it flawlessly: as he saw it, Swann and Collingwood were Andrew Strauss go-to bowlers and he wasn t going to let them settle.

Collingwood was first driven over mid-off for six effortlessly, bat coming through in a lovely arc, elbow high and very still, and then carted over midwicket as Tendulkar s fifty came up off 66 balls. Swann was then heaved for consecutive sixes as Tendulkar galloped through the sixties in two balls. Strauss promptly called on Anderson and Ajmal Shehzad; Shehzad was uppercut for four, Anderson driven and cut for consecutive boundaries. It was scintillating batting.

With Tendulkar striking the ball sweetly and harrying between the wickets, all Gambhir had to do was hold up on end and he did purposely while allowing himself the license to carve over backward point and extra cover. There are no better players of spin in the country than Tendulkar and Gambhir, and the latter used his feet beautifully to unsettle Swann and Michael Yardy.

Tendulkar went to his century off 103 balls his second fifty had taken just 37 balls with a glanced boundary off Bresnan and was received with ecstatic applause. That was followed by another six off Swann and two leg-side fours played to perfection. Tendulkar finally fell for 120 with the score on 236, caught at cover off a leading edge, but his innings had set India up for a big score.

England managed to control the batting Powerplay, allowing just 32 runs, only for Yuvraj to pick up the mood with two boundaries in off Yardy, through fine-leg and backward point. Yuvraj s form has been patchy of late, but England are his favourite opposition he has scored the most centuries against them (three) and averages 53.95 against them and the odds were always on his making a good score as long as he took the care to play himself in, which he duly did here.

He played second fiddle as Tendulkar blasted away, and took charge after he left, bringing up his fifty from 46 balls. By this time he had regained the carefree air of old, as evidence by merry fours and one big six over midwicket. He fell for 58, by which time India had already collected 305. Wickets fell in a flurry as the rest threw the bat around, with Bresnan collecting his first five-wicket bag, but the damage had been done much earlier.