India great Sachin Tendulkar will have to bide his time if he is to score his 100th international hundred in the first Test against England at Lord's after spending most of Sunday's fourth day off the field with a viral infection. 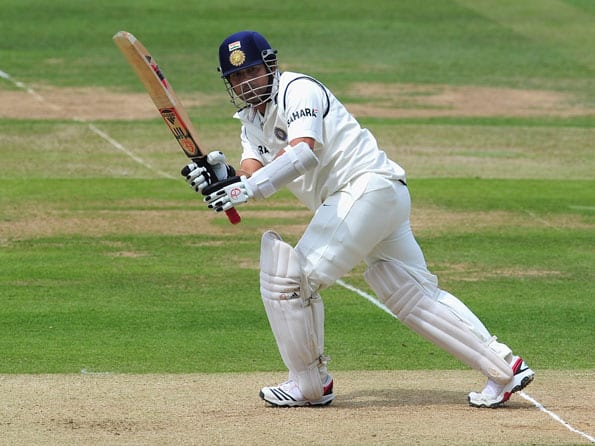 Sachin Tendulkar can only bat at No. 7 position or below in the second innings Getty Images

India great Sachin Tendulkar will have to bide his time if he is to score his 100th international hundred in the first Test against England at Lord’s after spending most of Sunday’s fourth day off the field with a viral infection.

The length of his absence means Tendulkar, dismised for 34 on Saturday, will have to wait until approximately 2pm local time (1300GMT) or five second innings wickets have fallen on Monday’s final day, whichever is the sooner, before he can bat. The delay could scuttle Tendulkar’s hopes both of scoring his 100th international hundred in this match — his 51 in Tests and 48 in One-Day Internationals are both records — and his first Test century at Lord’s where his top score in eight knocks to date is a modest 37.

Tendulkar, usually a number four batsman, returned for the start of Sunday’s final session, having been off the field for more than four hours.The 38-year-old played some trademark classic shots before he was caught at second slip by Graeme Swann off seam bowler Stuart Broad on Saturday.

Given his age, the second innings of this match could represent Tendulkar’s last chance to score a Test hundred at Lord’s — a feat that has so far also proved beyond fellow contemporary batting greats Ricky Ponting of Australia and retired West Indies star Brian Lara.

India will resume Monday on 80 for one, needing a further 378 runs to reach their victory target of 458, which will be a new record if they achieve it, and go 1-0 up in this four-match series.The highest fourth innings total to win a Test is the 418 for seven made by the West Indies against Australia in St John’s, Antigua, in 2002/03.

India also had a fitness question mark over Gautam Gambhir who was injured fielding at short leg and did not open the batting when his team started their second innings. Sachin Tendulkar returns to the field after not featuring all day against England until the start of the third session.

Gambhir trouble for India with three casualties on field