The ODIs are perceived to be on the decline and it's none other than Sachin Tendulkar who has now come out publicly in support of revamping the current 50-over format having written a letter to ICC Chief Executive Haroon Lorgat. 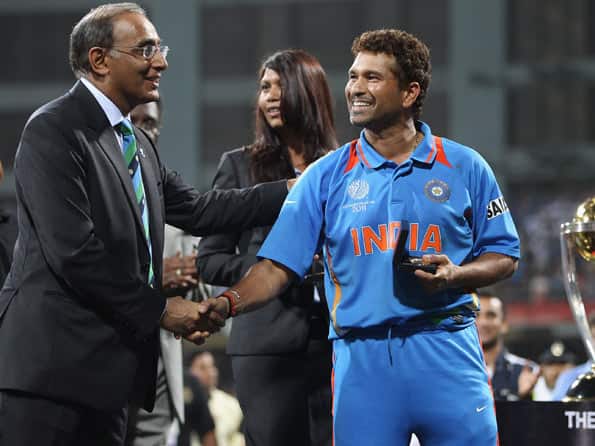 The ODIs are perceived to be on the decline and it’s none other than Sachin Tendulkar who has now come out publicly in support of revamping the current 50-over format having written a letter to ICC Chief Executive Haroon Lorgat.

Tendulkar, the world’s highest run-getter in both Tests and ODIs and someone who is on the threshold of his 100th international century, wants ICC to make “a radical switch” from 50-50 to four 25-over innings.

Apart from reducing the number of overs per innings, Tendulkar has also proposed several more changes for the ODIs.

The Indian batting icon had spoken about this new concept in television interviews in the past but had never written a letter to ICC in this regard.

“I have been capturing my thoughts on what I think would be the way forward to ensure that all three formats in the game co-exist and ensure value creation,” he wrote in the letter seen by ‘The Times’.

He argued that four alternate innings of 25 overs for each side in an international would be the fairest way of balancing the advantages gained by the team that won the toss when pitch and weather conditions mean that a match can virtually be decided by the spin of a coin.

In each 25-over block, Tendulkar wants only two Powerplays at the behest of the batting side but suggested that up to four bowlers should be allowed up to 12 overs each, rather than the present limit of 10.

One of the prominent matches featuring India seemed to have been lost after spin of coin was 1996 Wills World Cup semi-final when Lankans batted first on a square turner.

The match was awarded to Sri Lanka by the referee after a crowd riot which stopped proceedings after India lost eight wickets.

Again, Sri Lanka were unlucky when they were forced to chase a large Australia total in fading light towards the end of the 2007 World Cup final in Barbados.

Tendulkar also cited two games in the most recent World Cup when evening dew helped England to achieve a tie in their classic qualifying game against India in Bangalore but then counted in favour of Ireland during their famous run chase against England at the same venue.

A split into two equal innings a side was often proposed for the final of the domestic county competition in the UK – originally the Gillette Cup – in the days when it was invariably an advantage to field first, the report said.

The hover cover, instant outfield drainage and sophisticated drying equipment have ensured that matches at Lord’s almost always start on a dry pitch these days, but that is not the case everywhere.

In Australia last winter, the inter-state one-day tournament, the Ryobi Cup, was played over 45-overs-a-side, split into two alternate innings of 20 overs followed by two of 25.

Significantly, the new regulations appeared to overcome the relatively dull and predictable middle-over phases of 50-over games. (PTI)