Twitter reactions from current and former cricketers after Virat Kohli scored a tremendous 149 on day two at Edgbaston.

Virat Kohli s stroke-filled 149 out of a first-innings total of 274 has kept India in with a chance of at least drawing the first Test at Edgbaston, and has drawn plenty of praise from former and current cricketers.

A very important knock by @ImVkohli. Lovely way to set up the Test series. Congrats on your Test hundred. #ENGvIND

Thoroughly enjoyed watching that battle. Test cricket at it’s best. Triumph over adversity and a joy to watch Virat Kohli craft, construct and conquer his surroundings on to his 22nd test century.

A masterclass from Virat Kohli, leading from the front. A display of tremendous character determination and grit #ENGIND

Test bowling at its best .. Test Batting at its Best from @imVkohli .. These last 2 days have given us all a reminder why it s the best format by a country mile … #ENGvIND

For one of the best stroke players in the world, this Virat 100 was about not playing strokes.

UNBELIEVABLE!! One of THE best knocks from what little test cricket I have seen!! #ENGvIND #kohli

Virat is The King! 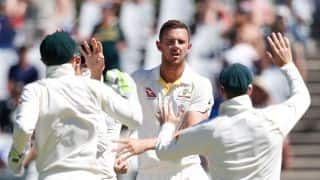