Manjrekar revealed that an offer to host a day-night Test match was turned down by India due to the players concerns.

Former India batsman Sanjay Manjrekar stressed that Test cricket is losing out on its popularity due to the players giving more importance to T20 leagues around the globe. “Today’s Test cricket is played in front of empty stands and IPL in front of frenzied crowds of 50,000 plus and millions watching on TV. It’s about playing the IPL (Indian Premier League) at all cost, player injuries surface before and after the IPL. IPL offers you fame and money and who will say no to this? Manjrekar said while delivering the ninth Dilip Sardesai Memorial lecture at the Cricket Club of India in Mumbai on Monday.

“Also, Test cricket is just too damn hard, so it’s no wonder that many are choosing T20 leagues over Test matches,” he said.

“Why aren’t we playing more day-night Test matches, when it s a no-brainer that it will draw more viewership,” he said.

Manjrekar revealed that an offer to host a day-night Test match was turned down by India due to the players concerns. The players are wary of it, wary of the pink ball, the dew factor. I always believed that conditions aren’t unfair if it is the same for both the sides,” he said.

He also advised administrators not to get influenced by players views. “I believe that people at the top should get their (players) views and not get dictated by those,” he said.

Meanwhile, Manjrekar blamed the batsmen after India were humiliated 1-4 to England in the Test series recently. “Interestingly, it was the batting that let India down this time (in England), the bowlers kept getting India back in the match and the batsmen kept letting those chances slip.

“It wasn’t temperament that was letting these batsmen down. In South Africa and in England it was purely a technical problem, specifically defensive technique,” he said. 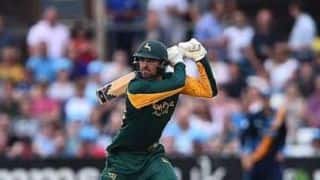