In his first match since being dropped, Maxwell scored 80 off 91 balls to set up a 13-run win over Queensland.

Dropped from Australia s Test squad last week, Glenn Maxwell has begun to channel his disappointment into winning games of cricket for Victoria as he bids for a recall. In his first match since being dropped, Maxwell scored 80 off 91 balls to set up Victoria s 13-run win over Queensland in the JLT One-Day Cup,

Asked about the feeling of being discarded from Australia s Test squad for the tour of the UAE to face Pakistan, Maxwell said his focus was getting points on the table for his state.

“I’m not thinking about that right now. That’s gone at the moment. No point dwelling on it and talking about it,” Maxwell said. “My job right now is to make runs and play well for Victoria. If I can contribute to wins like today and we can have some success and sing the song together they’re special moments.

“I feel like I haven’t won a lot of games this year. With Delhi we had a pretty average (Indian Premier League) tournament, with the English one-dayers over there we got pumped (5-0) and lost the tri-series final (in Zimbabwe) as well. There’s hasn’t been much success. I think we lost three of our four practice games as well. It’s nice to win a game and start the tournament off well. We haven’t always started the tournament well so today is a really good sign of where we’re heading as a group.”

Maxwell, 29, walked out to bat with Victoria 40/3 in the seventh over at Townsville, which became 66/4 when Cameron White was dismissed for 10. With Nic Maddinson, Maxwell put on 110 to get the score to 240, having hit eight fours and a six. That proved enough for Victoria in the end.

“From the position the game was in, coming in at three-for in the Powerplay and the ball zipping around and doing all sorts out there it was nice to get through that and put on a partnership with ‘Maddo’ and give us something to bowl at,” Maxwell said. “You’re always wary of when it seams in the morning that it’s going to flatten out in the arvo and lucky enough it still seamed around a little bit for their innings and we were able to get enough wickets to really drive the game after that. It was nice to get some runs and start the tournament off well.”

For Maxwell, there was no added incentive to succeed in state cricket after being axed from Australia s Test squad.

“You don’t need extra determination playing for your state, playing with your mates, that’s for sure. It was good fun to get back out there and I’ve got a lot of really good mates out here, he said. 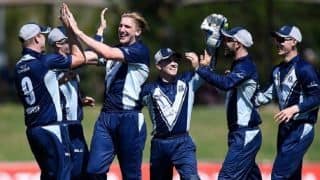