Sarfaraz Ahmed lamented that their horrendous batting show against the West Indies cost Pakistan dear in the World Cup.

Skipper Sarfaraz Ahmed lamented that their horrendous batting show against the West Indies when they were dismissed for just 105 cost Pakistan dear in the World Cup.

Pakistan exited from the showpiece Friday, despite beating Bangladesh by 94 runs, their fourth successive win.

Top four teams qualified for the semifinals and Pakistan (-0.43) finished at number five with 11 points, tied with New Zealand (0.175), but were beaten on Net-Run-Rate (NRR) by the Kiwis.

Their game against Sri Lanka was washed out and that also did not help their cause. They won four games in a row but still poor NRR hurt the side. “It’s very unfortunate. We played good cricket but haven’t qualified. That one game, against West Indies, cost us the tournament. Boys responded well after the India game. Did well in all three after that – batting, bowling, fielding,” said Sarfaraz at the post match presentation ceremony.

Asked what’s the way forward for Pakistan, the skipper said they need to sit down and plan. “We have two months off, and we need to do a lot of work with the team. At the moment, when team is winning everything is fine. Credit to our batsmen – Imam, Babar and Haris. And the bowlers – Amir, Shadab, Wahab, Shaheen.”

Sarfaraz also picked 19-year-old Shaheen Afridi for special praise as he picked up six wickets to become the youngest to take a five-wicket haul in World Cup. “The way Shaheen is bowling, the consistency is amazing. One of the best bowling performances I’ve ever seen.”

Bangladesh captain Mashrafe Mortaza said they had a 50-50 chance to win Friday’s game but no one could provide enough support to Shakib Al Hasan. “Shakib batted so well but we couldn’t get partnerships. I think we could’ve chased it, but partnerships were missing. I want to say sorry for Shakib, if we stepped up, the tournament could’ve been different. He batted, bowled and fielded well, he was fantastic,” Mortaza said.

“We are not satisfied (with result). We could’ve finished the World Cup on a good note, but end of the day, we’ve had a 50-50 World Cup. You give your 100%, and sometimes you need a bit of luck – but it’s never been with us.

He also said that their fielding was not up to the mark in the tournament but lavishly praised pacer Mustafizur Rahman. “Some important matches, our fielding wasn’t good. It cost us a lot. Batting was fantastic. Mustafizur, starting from his career, he was unplayable. He got injured, but since our Ireland tour he’s been really good. Hopefully no injuries for him in the future. He is real asset for Bangladesh cricket,” he said.

Talking about his own career, Mortaza said,”I will go home and rethink of my career, and then make a final call. Thanks to all supporters – present all over the ground and back home. They keep supporting us. Hopefully next time we will make them happy.” 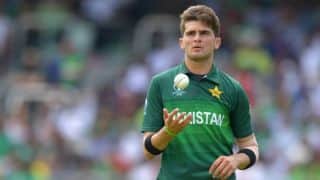