James Anderson is readying himself for raucous Australian spectators when he leads England's bowling attack in their Ashes defence 'Down Under'. England will set off next week looking to win a fourth successive Ashes series 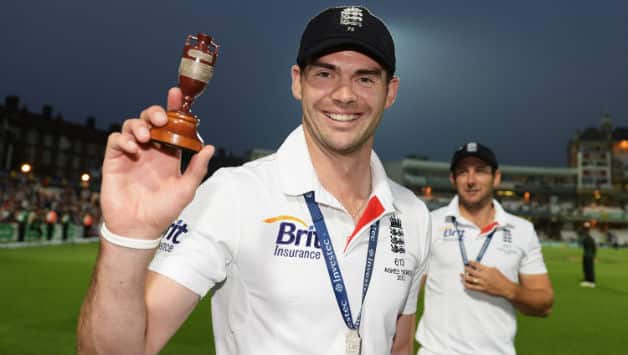 James Anderson is readying himself for raucous Australian spectators when he leads England’s bowling attack in their Ashes defence ‘Down Under’. England will set off next week looking to win a fourth successive Ashes series against their arch-rivals — a feat they last achieved in the 19th Century.

Anderson was a mainstay of England’s recent 3-0 home series win, where teammate Stuart Broad’s refusal to walk in the first Test led Australia coach Darren Lehmann to call on Aussie fans to make the seam-bowler “cry” in the return campaign.

“It can’t really get any more hostile than when we have played there before,” said Anderson, one of the stars of England’s 3-1 Ashes win in Australia in 2010/11. Australia in general can be quite an intimidating place to play, they are very passionate and very vocal as well.”

“Thankfully we have got a lot of experience in the team of people who have played there before in good times and bad times, we have experience of both the media and the public over there. The best way to shut them up is to perform well and certain players cope with it in their own ways,” said Anderson at a promotional event organised by Investec, the specialist bank and asset manager, who are the title sponsors of Test Cricket in England.

“The best way to shut them [the crowd] up is to play well and if we do that then hopefully we can silence the crowds. I don’t think that whatever has happened will make that any worse. It will be a very partisan crowd but it always has been and always will be.”

Meanwhile Anderson backed Broad to deal with any flak that came his way. “He [Broad] got quite a lot in 2010/11 and dealt with it brilliantly until he got injured. We all get stick when we go there, some more than others, and if you can accept that and prepare yourself for it and have a plan with how to deal with it then it goes a long way to dealing with it once you’re actually out there,” he said.

“Certainly in 2006 [when England were in the process of being thrashed 5-0 in Australia] I definitely felt that and I know a number of the wives and girlfriends felt that as well when we were walking around at Christmas time and walking down the street getting abuse.

“We dealt with it better in 2010 and tried to interact more with the public and embrace their culture rather than be guarded and stay in our little bubble. One thing we found as well was that when we started playing well a lot of the people over there actually started appreciating how well we were playing,” assured Anderson.

“It is just a passion for the sport and we understand that and hopefully we will enjoy that again.”
So dejected were some Australia fans during the 2010/11 Ashes they turned on their own side but Anderson is not expecting a repeat.

“I don’t see them doing that this time. At the start of that series they weren’t sure of the their strongest team. But now they are a bit more settled so I imagine their focus now will be more on Pommie-bashing so we will have to prepare ourselves for that,” he concluded.