Australia went into tea at 33-0 on Day One of the second Test at Adelaide Oval.

Australia went into tea at 33 for 0 on Day One of the second Test at Adelaide Oval. As it was forecasted, rain played a spoilsport in the first session. While the first rain break limited to 10 minutes, the second one forced the umpires to take early tea.

Cameron Bancroft (10*) and David Warner (21*) played cautiously with the new, swinging pink Kookaburra. It was imperative for the openers to keep wickets intact, given the rain will sprinkle throughout the day and the conditions will gradually assist the bowlers. That being said, Bancroft and Warner will look to emulate their stunning partnership they had stitched up at The Gabba.

Joe Root became the first captain to win the toss and elect to bowl in a day-night Test. However, the decision was not taken well by the experts. Although the pink ball would swing more on a fresh wicket, it appeared on the slower side, for seldom did the ball take off the surface. Bancroft and Warner did not face difficulty in defending the moving ball. 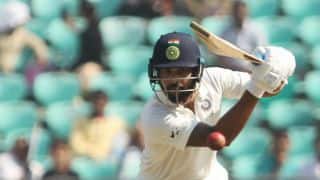