Australia went into dinner at 138 for 2 on Day One of the second Test at Adelaide Oval.

Australia went into dinner at 138 for 2 on Day One of the second Test at Adelaide Oval. England removed openers Cameron Bancroft and David Warner after the tea break. However, Usman Khawaja pursued aggressive brand of cricket and kept the scoreboard ticking.

Bancroft looked in good touch. With the English seamers moving the ball both ways, he took very little time to adjust to the conditions. However, he had to pay for Warner’s misjudgement between the wickets. After Moeen Ali misfielded at short cover, Warner charged forward and called for a run. But the ball had ricocheted to Chris Woakes at mid-off by the time Warner retreated. Bancroft, who had already ran for the single, was sent back. Woakes did well to inflict a direct-hit.

England gained confidence after the fall of wicket. Stuart Broad ran in hard and tried to induce an edge off Warner’s bat. Warner, however, gave an impression that he was giving his all to nick one behind the wickets. At the end was Usman Khawaja. England bowled probing lines to him as well, but that edge England were yearning for remained eluded. However, after surviving 101 deliveries, Warner finally fell. Woakes made him play at the one pitched in the corridor of uncertainty.

The crowd roared in unison when Steven Smith stepped out. It was time for England to buckle up. Broad, for that matter, sledged him to unsettle his mind. But Smith, as always is the case, was hellbent on keeping his wicket intact.

Luck remained with Australia, as England dropped Khawaja when he was marching towards his fifty. Mark Stoneman at long leg could not hold on to the catch while diving to his right. Khawaja eventually reached his fifty, his 9th in the format. 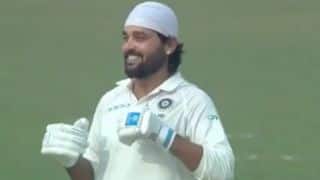