England squeezed the life out of the Australian batters on the opening day of the second Test. The pace duo of James Anderson and Stuart Broad conceded a mere 84 runs in 39 overs between them.

England squeezed the life out of the Australian batters on the opening day of the second Test. The pace duo of James Anderson and Stuart Broad conceded a mere 84 runs in 39 overs between them. For Australia, Usman Khawaja provided impetus with his ninth century.

Joe Root was heavily criticised for electing to bowl first after calling it right at the toss. Perhaps England had envisaged that the track would slow down as the match progresses and that they wanted to extract whatever was on offer. Lucky were they that Australia could not fire and that Smith was restricted to a mere 40.

As it was forecasted, rain played spoilsport twice in the morning session, forcing the umpires to take early tea. David Warner and Cameron Bancroft remained unbeaten on 21 and 10 respectively.

England finally got the breakthrough. After the tea break, David Warner misjudged a misfielding and called for a single. Bancroft, replying to Warner, charged for the run but was sent back at the last minute. Chris Woakes inflicted a direct hit, dismissing Bancroft for 10.

England bowled probing lines to Warner and Usman Khawaja, but the Australians composed themselves in order to survive longer. Decorated with 5 fours, Warner scored 47 before edging one to Jonny Bairstow. Australia were 86 for 2. In came the in-form Steven Smith.

Both Anderson and Broad gave a mouthful to Smith. However, Smith was not one to unsettle. He gave back to the Englishmen, dealing in shuffles. While the war of words continued, Khawaja reached his fifty. Australia went into dinner at 138 for 2.

Peter Handscomb and Shaun Marsh did well to hold the fort, adding 48 runs for the fifth wicket. Broad and Moeen Ali remained wicketless. 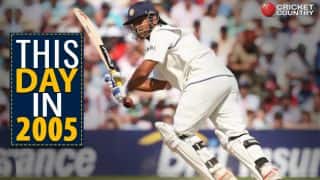 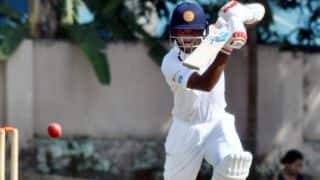