Australia were in a tricky situation at The Gabba, Brisbane. Reeling at 76 for 4, Shaun Marsh played second fiddle to skipper Steven Smith. Smith went onto score a magnificent century, and Australia got off the mark in the 2017-18 Ashes, winning the first Test by 10 wickets. England again seemed to have an edge when Smith walked out when Australia were stuttering at 161 for 4 on the opening day of the day-night Test at Adelaide. Nonetheless, Marsh carried on from where he had left in Brisbane, and took the onus.

Marsh scored a scintillating 126 not out, and took Australia to 442 for 8 declared. After the end of second day’s play, with England 29 for 1, Marsh shared his thoughts on slamming his maiden Ashes ton. “I felt nice and relaxed in the middle (in Brisbane), just nice to continue on in this game. I haven’t thought about the external noise about my selection in the team. I’ve just tried to come in and be nice and relaxed and I feel really good with my game in the last three or four months”, he added.

“It’s nice from a personal point of view to get a hundred. There were a few emotions there, probably when I got to 90 and a few nerves came in. I’m just extremely happy and to get an Ashes hundred is pretty special.”

‘Happy to have this last chance’

“(Australian chief selector) Trevor Hohns rang me and said the door wasn’t shut (after being dropped for Bangladesh tour). Six months ago, I wasn’t sure if I was going to be back here. I always dreamt of being back here. I went to England and had some really good fun playing over there and tried not to think about it (a Test recall) coming back to our summer. Just really happy to have this last chance and how it’s gone.”

‘It will be a big morning tomorrow’

“It will be a big morning tomorrow. It was disappointing with the rain but it is a really important first session tomorrow”, Marsh concluded. 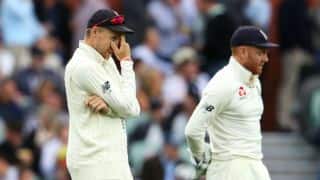