England lost two more wickets in the second session of Day One, dancing to Australia’s chin music. Josh Hazlewood and Mitchell Starc sent down barrage of bouncers to unsettle the Englishmen on a bouncy Perth track, more importantly dismissing a set Mark Stoneman.

England lost Joe Root immediately after the lunch break. It was one of the softest of dismissals, as Root edged it instead to Tim Paine while guiding it down the leg. So disappointment was he that he was unwilling to leave the crease.

Stoneman looked as fluent as he was in the morning session, reaching his third half-century and looking good for a big knock. But the Australians would not let him off the hook. They agitated his foot work, bowling short balls. Hazlewood finally found an outside edge, but Mitchell Starc at first slip dropped it while squatting.

Steven Smith brought Mitchell Starc from the other end, and got the breakthrough. The HotSpot could not spot the edge, but the faint spike on the Snicko helped third umpire Aleem Dar to judge Stoneman out. The commentators thought that the lack of conclusive evidence should have given Stoneman benefit of doubt. Joe Root, too, judged the same, but he expressed it by punching the glass door in the dressing room.

Dawid Malan, however, did not look bothered by bouncers. He took the attack to the opposition, and has already scored 42 off 70. With him at the crease is Jonny Bairstow batting on 14. 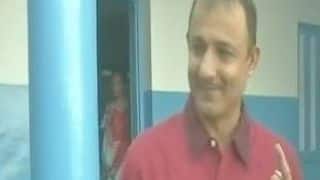