Australia pushed England in further trouble before tea on Day Three of the third Test at Adelaide Oval.

Australia pushed England in further trouble before tea on Day Three of the third Test at Adelaide Oval. England lost as many as three wickets, scoring 99 runs for 4 wickets in the second session.

James Vince was the first to go this afternoon. Josh Hazlewood bowled a probing line, forcing Vince to drive. Tim Paine took an easy catch behind the wickets.

Joe Root played a lovely shot past the slip cordon to pick up his first boundary. However, Australia persisted with the same line, luring the Englishmen into playing false strokes. Root crashed into the trap and gave a regulation catch to Cameron Bancroft at third slip. England were 50 for 3.

Alastair Cook was still in the middle, finding his lost mojo. Since his magnificent 243 against West Indies in August this year, Cook has not scored a fifty in 6 innings. However, he looked in good touch today. He found his feet with a leg-glance and square-cut. A long innings was expected of him, but he could not fight his habit of poking outside off. Lyon drifted one in and sharply spun away from Cook, inducing an edge to Smith.

In came Moeen Ali and played two powerful sweeps off Lyon. He even shimmied down on a few occasions to unsettle the off-spinner. But the counterattack did not hinder Australia’s confidence. Cummins removed Malan for 19. Paine dove to his right to pouch the inside edge. 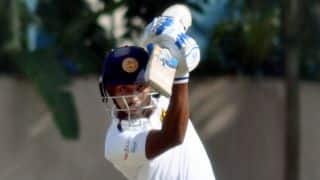