Australia lost a solitary wicket of Shaun Marsh before lunch, but Steven Smith continued batting and is unbeaten on 139 on Day Three of the third Ashes Test. To make use of the old, ruffled ball before taking a new one, Joe Root passed it to Moeen Ali who bowled a lovely off-spinner to induce an outside edge. Shaun could not inhibit himself from poking it to first slip.

England placed a mere slip for Smith at the start of the day, trying to control the run rate than taking a wicket. Not minding England’s tactics, Smith found it easier to extend his stay. And as he got his eye in, Smith played the ageing ball with ease and comfort as he stroked to his 22nd hundred. On 112, he completed a thousand runs in 2017. This is the fourth year on a trot that Smith has done so.

Shaun played four delightful fours, two of which were peppered off Moeen: he scored consecutive boundaries past mid-wicket, not letting Moeen settle. But, as Moeen bowled in the right channel, Marsh failed to survive. In his came his brother Mitchell and upped the ante even further. He has already amassed 6 fours in his 39-run knock. Making a comeback after a year, the drying Perth wicket his home track has been helping Mitchell to find his lost mojo. Along with Smith, he added 66 runs for the fifth wicket. Australia have reduced the deficit to 89 runs. 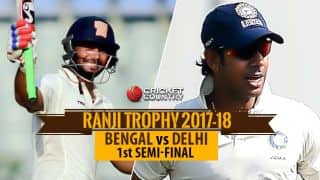