Nathan Lyon hunted down Joe Root off the first ball of his spell.

Nathan Lyon hunted down Joe Root off the first ball of his spell. It was a regulation off-spinner that Root was lured into playing a drive. He induced an outside edge that ricocheted off Tim Paine’s pads to Steven Smith at slip. That was England’s third wicket in 15 overs before tea in the pursuit of a 259-run deficit in the second innings.

England continued having a tough time in the 2017-18 Ashes. After Australia declared at 662 for 9, England lost openers and thus the plot. Josh Hazlewood was the wrecker-in-chief. First to go was Mark Stoneman. Undecided on whether to go for the shot, he produced an edge before withdrawing his bat. Cook soon followed him in the pavilion, getting caught and bowled: Hazlewood took an excellent catch.

James Vince had others plans. With England already struggling, he did not bog down and minded his own run-scoring business. He is unbeaten on 36 off 56, with Dawid Malan, the centurion of the first innings, at the other end. Umpire called early tea when rain stopped play. 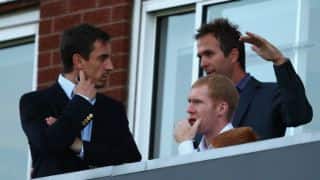