England were tottering at 131 for 4, before recovering to end Day One at 305 for 4 courtesy Dawid Malan's century.

Day One of the third Test proved to a gruelling contest. England were reduced to 131 for 4 but showed they have got the stomach for a turnaround in the series. Courtesy Dawid Malan‘s maiden hundred and Jonny Bairstow’s fifty, England amassed 305 for 4 at stumps. Australia were guilty of two dropped catches, some fatigue coming in towards end of day and bowlers not hitting the right areas consistently. Mitchell Starc admitted the flaws and credited England for their approach. He, however, hopes for a quick turnaround on Day Two.

England added 136 runs at 3.61 in the last session. Bairstow and Malan have stitched the highest fifth-wicket stand for England in Perth.

“It was a tough day. (Dawid) Malan played really well, credit to him. It’s a pretty flat wicket, there’s a bit of bounce, but not a lot of sideways movement. Having said that, we didn’t bowl well, didn’t put the ball in consistent areas and that allowed them to get away, need to get back fresh tomorrow,” said Starc after end of play.

‘It was a sort of risk and reward approach’

“This is the fastest outfield in the country and we haven’t batted as yet. It’s been pretty even for most part of the day, would have loved a couple of late wickets to put our noses in front, but credit to them. They took on our bowlers and it was a sort of risk and reward approach. We need to get a couple of wickets upfront tomorrow to get back into this game,” concluded Starc. 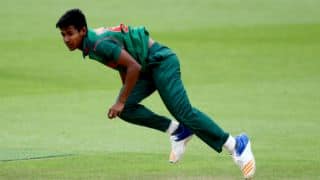