Australia have not announced their playing XI. Steven Smith said they will finalise only after assessing the pitch before the toss. England, on the other hand, will play the same XI.

The last time Mitchell Marsh played a Test was against India at Bengaluru in March this year. Marsh, an all-rounder, bowled a mere 5 overs and scored 12 runs in two innings. Had he not been injured, Australia would have dropped him anyway for the remaining two Tests.

Marsh is a fine cricketer, someone of resources. He can clock above 140 kmph and strike the ball ever harder. However, tenacity and temperament have been his enemies, and he was not even in the vicinity of playing in The Ashes 2017-18. Australia needed the urn they had lost to England, and carrying Marsh would have been a burden.

Australia had sent him back to domestic cricket. The selectors spoke to him to keep him motivated. Although he could not fulfil the hopes that were rested on him, they had always wanted to use his services for the long run.

Since October, Marsh has scored 2 hundreds and 3 fifties for Western Australia, though he bowled only in the last two matches. Rightly, he received a call back for the third Test and will replace Peter Handscomb only if the track is favourable for the batters. Mitchell s inclusion, in all probability, will promote his brother Shaun at No. 3. And, by the way, the match will be played in Western Australia, a place the Marsh family has made iconic with their brand of cricket.

Australia have not announced their playing XI. Steven Smith said they will finalise only after assessing the pitch before the toss. England, on the other hand, will play the same XI.

Alastair Cook will become the first Englishmen to 150 Tests. He has over 11,000 runs including 31 hundreds. Before his milestone match, Mitchell Johnson has reckoned that Cook is already contemplating retirement. Cook, however, cleared the ashes from the air, stating that he has no plan of quitting. With only 62 runs in the series, Cook has a lot to do to quash Johnson s judgements.

England s comeback cannot be ruled out. The Australians do, of course. Some of them have even orchestrated an event to boo Stuart Broad at the venue. But then, there is always the Barmy Army to paint the Australians in the words of humour (or some may say humiliation).

The Ashes is tied 32-32. Australia are one win away from taking a lead, and England are one defeat away from putting their momentum off the rails.

Joe Root has been braving Australia with top-class batting, but he can t stifle the fire the Australians have set to reduce England to ashes alone. The visitors have to use some of it and blow it back on the Australians. That is how counterattacking is done, and that is only how Australians go on the back foot, if not surrender.

It s probably not as hard as I would have liked it to be a day out, but 24 hours can change a wicket. Steven Smith.

I want to be concentrating on making sure we get things right on the field. That s my job as captain. I m trying to develop a team that over a long period can achieve success and do special things. Joe Root. 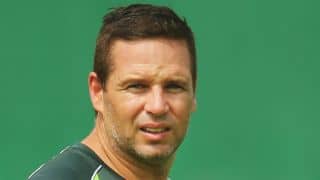