David Warner plundered England's bowling on a flat pitch to put Australia in a commanding position on the opening day of the fourth Ashes Test in Melbourne on Tuesday.

David Warner plundered England’s bowling on a flat pitch to put Australia in a commanding position on the opening day of the fourth Ashes Test in Melbourne on Tuesday.

Warner capitalised on Australia winning the toss and had his first century of the series in sight after an ominous opening session.

Australia have already reclaimed the Ashes after taking an unassailable three-nil lead in the five-Test series and are chasing a 5-0 whitewash over the beleaguered tourists.

At lunch, Warner was on 83 from 93 balls with Cameron Bancroft providing the anchor role of the opening partnership on 19 with Australia 102 without loss.

The Australian openers set up a platform with a steady opening hour, scoring 37 runs before breaking the shackles in the hour before lunch.

Warner scored an unbeaten 87 in the second innings of the first Brisbane Test and was poised to surpass that in bat-friendly conditions at the Melbourne Cricket Ground.

It was the first toss captain Joe Root has lost in the series and a potentially bad one to lose on a straw-coloured pitch under cloudless skies with a hard day in the field in the offing for England.

Stuart Broad went wicket-less in his first seven-over spell and had the unflattering figures of 0-197 from 61 overs since he last took a wicket, on day two of the second Adelaide Test.

Debutant Tom Curran came into the attack in the 20th over and bowled with gusto but without any cut through.

Cricket Australia expect the Boxing Day crowd to likely to surpass the 91,112 that made Ashes history in 2013-14 even though England had already lost the series.

The Australian players were wearing black armbands in memory of Thomas Maggs, wicketkeeper Tim Paine’s father-in-law, who passed away on Sunday. 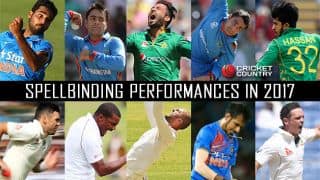 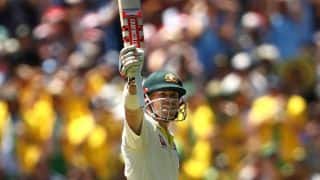