Steven Smith remained unbeaten 87 and is en route to his 23rd hundred in the format.

Australia went into tea at 225 for 4 on Day Five of the fourth Ashes Test at Melbourne Cricket Ground, leading England by 61. Steven Smith remained unbeaten 87 and is en route to his 23rd hundred in the format. The session, however, produced a mere 47 runs for no loss of wicket.

There’s not much to narrate about the tea session. Smith, as has been the case (forever), continued to get under England’s skin. If he reaches the three-figure mark, it will be his 21st hundred in 5 years, meaning he had a mere 2 hundreds from 2010 to 2014.

England lost the plot. Or, with Smith batting, they never had control over the game. On a Day-Five, dusty track, England missed a spinner who could catch the Australians in the crease. Joe Root dismissing David Warner (86) off the very ball is evidence to the fact. The ball hit a rough patch, and the puff of dust did the rest. England gave Moeen Ali a chance, but he continued to be rusty. For that matter, David Malan, a part-time leg-spinner, did well to keep Smith at bay.

For England to win the match, Australia will have to dramatically and uncharacteristically collapse. 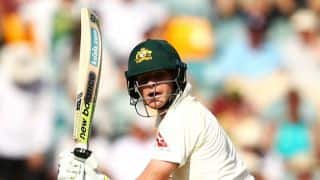