Australia were all out for 327 shortly after lunch on the second day of the fourth Ashes Test against England at the Melbourne Cricket Ground on Wednesday.

Australia were all out for 327 shortly after lunch on the second day of the fourth Ashes Test against England at the Melbourne Cricket Ground on Wednesday. Stuart Broad took four wickets for 51 as Australia lost their last seven wickets on the second day.

England, already an irretrievable 3-0 down in the five-match series, dismissed Smith, Mitchell and Shaun Marsh, Tim Paine and Jackson Bird to take five for 82 in the first session in baking temperatures.

Debutant Tom Curran celebrated his first Test wicket as Smith chopped a short, wide delivery on to his stumps on 76, just 30 minutes into the second day’s play.

It was the first of three similar drag-on wickets for England’s bowlers on a slow-paced MCG pitch. At lunch, Pat Cummins was batting on four not out with Josh Hazlewood yet to score.

Smith had not been dismissed in a Melbourne Test match since Boxing Day 2014, and was on track for his third century of the series on a bat-friendly MCG pitch.

In the previous three showpiece Boxing Day Tests, Smith had scored 192 against India, 134 not out against the West Indies and an unbeaten 165 last year against Pakistan.

Smith threw his head back in annoyance as the bails flew into the air. With his dismissal Smith has now scored 502 runs in the Ashes series at a stunning average of 125.50.

It was an overdue slice of luck for Curran, who had David Warner caught on 99 only to have the dismissal overturned for an overstepping no-ball on Tuesday’s opening day. Warner went on to score 103.

England got more return for bowling wide of the stumps when Mitchell Marsh also dragged on a Chris Woakes delivery for nine after his 181 in the third Test in Perth.

His elder brother, Shaun, lost a leg before wicket review on 61 off 148 balls to Stuart Broad.

It was Shaun Marsh’s second half-century of the series after scoring an unbeaten 126 in the second Adelaide Test.

Paine became the third batsman to chop on to his stumps in the session for 24, giving James Anderson his second wicket, while Bird fell leg before wicket to Broad for four. 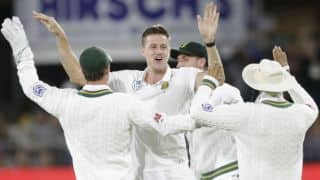