David Warner scored his 27th fifty in the format to steady Australia in the second session of Day Two of the fifth Ashes Test.

David Warner scored his 27th fifty in the format to steady Australia in the second session of Day Two of the fifth Ashes Test. Although James Anderson removed him at the stroke of lunch, Usman Khawaja continued batting on a flat SCG track: he is unbeaten on 36. The duo added 85 runs after Cameron Bancroft perished in the second over of the innings.

Warner played delightful strokes, collecting 6 fours. However, it was his running between the wickets that put England off the rails. Khawaja did well to match up to Warner’s speed.

Warner has three hundreds at the SCG already, and another hundred was on the cards everytime Warner looked eager to collect runs. From crisp footwork to immaculate timing, Warner had everything going his way. But an Anderson delivery did the trick. The spull swung sharply away from Warner and carried an edge to Jonny Bairstow. In all Warner averages 57 at the venue.

Australia now trail England by 250. At the crease, with Khawaja, is Steven Smith. India vs South Africa: Team India players asked to save water by cutting down bathing time 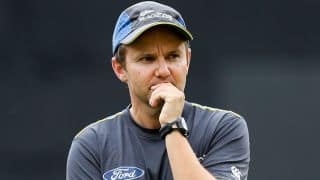