Australia took the lead over England as Usman Khawaja closed in on his highest Test score in the final Ashes Test in Sydney on Saturday.

Australia took the lead over England as Usman Khawaja closed in on his highest Test score in the final Ashes Test in Sydney on Saturday. The Australians passed England’s 346 total nearing tea in the chase for a big innings lead to put pressure back onto the tourists heading into the final days of the match. At tea on the third day, Khawaja was unconquered on 166 off 368 balls and just off his highest Test innings of 174 scored against New Zealand in Brisbane in 2015.

Shaun Marsh reached his fourth half-century of the series and was 54 not out with Australia 365 for three, representing a lead of 19 runs with seven wickets intact. It was the Pakistan-born Khawaja’s sixth Test hundred and first in Sydney and came at a time when some critics were calling for his sacking despite scoring two half-centuries earlier in the series. Marsh survived a review on 22 for a catch behind off Joe Root after the “Snicko” and “Hot Spot” technology could not find supporting evidence.

England earlier claimed Steve Smith’s prized wicket before lunch for 83 when, with a fourth century of the series beckoning, Moeen Ali caught and bowled the Australia skipper. Smith, who looked untroubled batting patiently through the morning session, left the field shaking his head after batting for 253 minutes and facing 158 balls.

Smith and Khawaja seized the momentum for Australia with a 188-run stand as England chase a face-saving win after trailing 3-0 in the series.

The skipper has been the difference between the two sides in the series with three centuries, including a Test best 239 in Perth.

There was drama in the final over before lunch when Khawaja, on 132, survived a review for leg before wicket but only after debutant leg-spinner Mason Crane had been found to have overstepped for a no-ball.

To rub further salt into England’s wounds, the ball would have have hit Khawaja’s stumps. 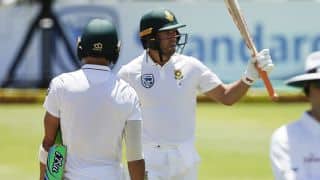 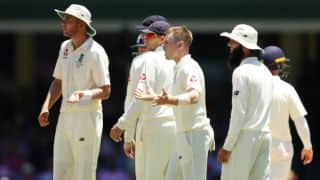