Alastair Cook and Stuart Broad were under criticism for their repeated failure in the Ashes 2017-18.

Alastair Cook’s drought finally came to an end. He had averaged just over 13 in the 3 Tests before he slammed a century at MCG on Wednesday to place England in a strong position. Cook and Stuart Broad were under criticism for their repeated failures in the Ashes 2017-18. Broad’s 4-for restricted Australia to 327 before Cook took the charge with the bat.

Cook, a 151-Test veteran, had gone 10 innings without a fifty. This was his longest dry spell of his career. Cook registered his 32nd Test hundred in the final over of the day’s play to place England at 192 for 2. Cook has made an English record of 34 consecutive Ashes Test appearances.

“He’s always been a very tough character, mentally strong guy and he was always going to come good at some stage. I think Cookie has always had these periods in his career where he might not score the runs he wants but then he gets a really big score. He’s someone who doesn’t just deal in little hundreds, he just seems to go big and as part of the bowling unit I would like him to do the same tomorrow,” said Broad.

Cook had a let-off on 66 when Steven Smith put down a chance at the slips off Mitchell Marsh. If Cook and Root aren’t separated early, England could be in a winning position. 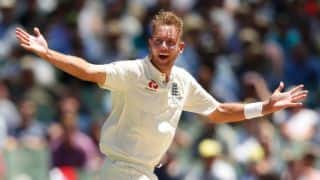