England have eased through three warm-up games leading into the first Gabba Test.

Brisbane: Coach Trevor Bayliss says England are “very confident” of their chances in this week’s opening Ashes Test in Brisbane despite expecting Australia to hit hard from the start.

The tourists have eased through three warm-up games leading into the first Gabba Test, but Australian Bayliss expects the intensity to spike against Steve Smith’s team with the Ashes on the line.

Bayliss said England got everything they wanted out of the three warm-up games and was confident of defying their poor record at the Gabba when the First Test begins on Thursday and pulling off a huge upset.

“Australia like to hit the opposition hard early and we have been talking about going hard ourselves,” Bayliss told reporters after England’s drawn match with a Cricket Australia XI in Townsville on Saturday.

“Over the three games we started slow, then built it up over the last couple of games,” he added. “An Ashes Test will see our intensity rise as high as it possibly can.

“We are not here to make up the numbers. We are here to win. We’re very confident.” The Australians have not lost a Gabba Test since November 1988, while England last won there 31 years ago.

England have won in Brisbane only four times in 20 Tests — twice in the 1930s, once against the Kerry Packer-weakened 1978-79 Australians and the last time was in 1986.

Bayliss said he was satisfied with England’s build-up to the first Test, which gets under way on Thursday.

Novices Jason Sangha and Matt Short scored their maiden first-class centuries for CA XI to keep England in the field on the last day the Townsville warm-up game.

Sangha hit 133 off 226 balls, while Short remained unbeaten on 134 off 264 balls when the game was called off late on Saturday.

“The final day wasn’t the perfect game of cricket for us. But it’s time in the dirt, and we will probably have another one or two of them in the Test matches,” Bayliss said.

“It was probably good to experience it, and the heat as well. We are always a bit disappointed when we don’t take 10 for 90.

“We decided to try a few things where normally we would hone in on line and length and concentrate on that.

“We thought we’d try different tactics and field placings to see how it went. It’s difficult on a flat wicket. “If you play cricket long enough those days will happen. They stuck at it, and that’s all you can ask.”

After Craig Overton’s struggles in Townsville, where he recorded match figures of two for 97 and registered his third successive duck on tour, fit-again Jake Ball appears to be ahead of him as England’s probable fourth seamer at the Gabba.

“I thought Ball was our best bowler in Perth and he started that way again in Adelaide before he sprained his ankle,” Bayliss said.

“He’s fine now, is bowling again, and should be fit and raring to go at the Gabba.” 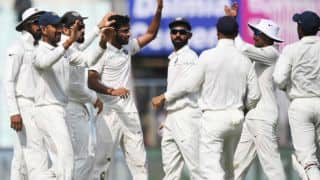