At stumps on the second day Australia were 203 for three with the in-form Smith unbeaten on 92, leaving England's hopes of retaining the Ashes precariously poised.

At stumps on the second day Australia were 203 for three with the in-form Smith unbeaten on 92, leaving England’s hopes of retaining the Ashes precariously poised. Australia, who lead the series 2-0 and can regain the Ashes with victory at the WACA Ground, trail by 200 runs with seven wickets in hand after dismissing England for 403.

Heavy rain is forecast for the final two days. Wicketkeeper-batsman Bairstow, who notched his fourth Test century in making 119, said the match was evenly balanced and conceded Smith’s wicket was key, but believed England had a perfect chance to take control when play resumes on the third day.

“We have the capabilities of taking five or six wickets in a session, we have shown that previously and there is no reason we can’t now,” he said.

“Our boys have got the skills to get 20 wickets in this Test match. Tomorrow when we come to bowl in the morning is a huge session for us.

“We need to try and keep the Aussies behind us for as long as possible, if we can nip some wickets and get the bowlers in and our guys are still fresh … and we’ve got the new ball as well.”

Promoted to bat at six, Bairstow was beaming after the day’s play as he reflected on an extremely emotional century.

It came after a testing period including the bizarre “head-butting incident” at a Perth bar involving Australian batsman Cameron Bancroft, and a war of words with the host team on and off the field.

“The hundred in many ways was my favourite one, it meant a huge amount,” he said. “I have played in a few Ashes series now — to score an Ashes hundred is something you dream about as a kid.

“It has eluded me until now and it was a whole heap of emotions that came running through.”

The 28-year-old played down his century celebration, which including knocking the helmet against his head several times, and said it was completely spontaneous and “a bit of a light-hearted fun”.

Bairstow and Dawid Malan, who notched his maiden Test century in making 140, set a new record fifth-wicket partnership of 237 for England against Australia.

At 368 for four the visitors seemed in total control, but the loss of Malan sparked a stunning collapse as they lost their last six wickets for just 35 runs before lunch.

The unbeaten Smith presents a major obstacle for England, having looked almost completely untroubled as he closed in on a 22nd Test century.

He paired with Usman Khawaja to add 124 for the third wicket, and faced just 122 balls and hit 14 fours and one six by stumps. Khawaja, who survived a tough caught-and-bowled chance from Chris Overton before he scored, was adjudged lbw to Chris Woakes for 50 and failed with his third umpire review.

Overton was forced from the field late in the day with a side injury, while Shaun Marsh was left unbeaten on seven alongside Smith. 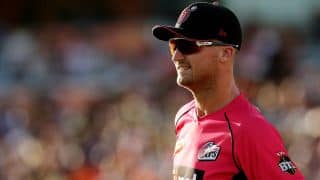 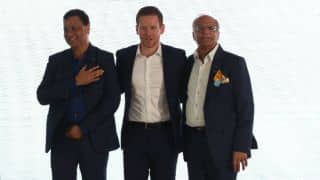 Eoin Morgan: T10 cricket can be a prominent format