Ashes 2017-18: Ian Chappell fears the worse for England, especially under these tough as well as controversial circumstances.

With just 11 days to go for the 2017-18 Ashes, England have plenty of problems resolve. To make matters worse, no conclusion has been drawn on Ben Stokes’ street-brawl case. Although they have done well in the two warm-up ties they have played so far, England’s pitfalls may come to the fore. Former Australian great Ian Chappell fears the worse for England, especially under these circumstances. FULL CRICKET SCORECARD: Australia vs England, Ashes 2017-18, 1st Test at Brisbane

On the upcoming Ashes

Apart from the militarily planned, successful assault on Australia in the 2010-11 Ashes series, the story of English tours in the last 30 years has been one of futility. Joe Root will need to be an extremely strong leader and his team exceedingly resilient if the current Ashes tour isn t to unravel like so many in the recent past. Commencing with the considerable setback of Ben Stokes arrest in late September, this tour is shaping up as a replica of the disastrous 2002-03 campaign, said Ian Chappell in his column in ESPNCricinfo.

In an act of supreme optimism, the 2002-03 tourists arrived in Australia with injury-ravaged fast bowlers. The two main protagonists, Darren Gough and Andrew Flintoff, failed to overcome their injuries and then, to rub salt into English wounds, the speedy Simon Jones damaged his knee in the opening contest and flew home. The suspension of Ben Stokes, the pre-tour injuries to Toby Roland-Jones and Mark Wood, and then the recent setbacks suffered by Moeen Ali, Steven Finn and Jake Ball mean this Ashes series has all the hallmarks of a familiar English horror story.” The Ashes 2017-18: Ben Stokes absence hurting England, opines Ryan Harris

In the lead-up to the tour England featured a strong pace attack and a dodgy batting line-up. Australia were similarly placed but they have since lost only one pace bowler to injury, while England s fast men are going down like ninepins. Thanks to Stokes self-inflicted wound and the long injury list that followed, Australia s brittle batting line-up will now be facing a seriously challenged string of England seamers.

“With Stokes batting at five, England could have played an extra bowler and gambled on promising legspinner Mason Crane. On Australia’s unforgiving pitches a good legspinner can be invaluable and in this case he’d have been one of six front-line bowlers, so Root could have used him selectively. In Stokes’ absence this is not a realistic option. They now have to hope Jimmy Anderson finds ways to make the Kookaburra ball swing; he needs to be a reliable spearhead if England are to remain competitive.”

“Without that extra pace to call on, a captain needs to rely on subtlety, variation and accuracy. England lack both variety and genuine pace, as the attack features all right-arm fast-medium bowlers. The addition of Stokes’ fiery approach and a legspin option would have come in handy. Consequently, it’s going to take planning similar to that produced by Andrew Strauss’ side in the successful 2010-11 campaign for England to retain the urn. However, this approach is dependent on having decent totals to allow the bowlers a bit of leeway in seeking wickets.” 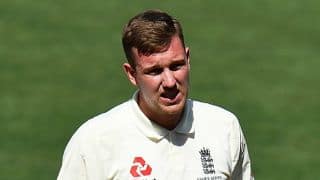