David Warner has pitied Ben Stokes for missing out of the Ashes, owing to his alleged involvement in a street brawl at Bristol.

With just a couple of days to go before the opening Test of the 2017-18 Ashes kicks off at The Gabba in Brisbane on Thursday, the ‘word war’ continued between the two sides. Meanwhile, David Warner has pitied Ben Stokes for missing out of the Ashes, owing to his alleged involvement in a street brawl at Bristol. Warner said that he would have love Stokes to play in the Ashes, as he is a world-class player and great competitor. However, he also added that Stokes had let the people in his country down, and he must work on earning back the respect. FULL CRICKET SCORECARD: Australia vs England, Ashes 2017-18, 1st Test at Brisbane

On Stokes missing out Ashes

“I think it’s probably disappointing for the England team and the country. I think he’s let a lot of people down. I would have loved for him to be out here, because I know what a competitor he is on the field, and he’s a world-class player. It’s obviously up to the English police first. But at the end of the day he knows he’s made a mistake, and it’s about him getting the respect back from his players and fellow countrymen. If he does come out here we wish him well and hopefully he brings the fieriness that he does to the competition and to the cricket. I wish everyone well. We’re all sportsmen. We’re trying to achieve the same thing and that’s to win. So I wish everyone good luck,” said Warner. 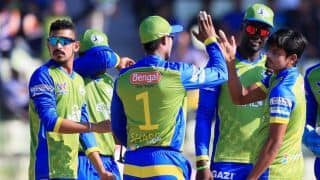