James Anderson claims that pace has not caused problems for the Englishmen in the series and also questions Australian pace depth.

England have been hammered so far in The Ashes 2017-18. They had good sessions but never capitalised on it, whereas Australia have found solutions. James Anderson claims that pace has not caused problems for the Englishmen in the series. He also questioned Australian pace depth.

The Australian pace trio Mitchell Starc, Pat Cummins and Josh Hazlewood have been clocking at 150 km/h throughout the series, whereas England pacers have struggled to bowl at 140 km/h. Many former players and pundits have made the judgment that pace has won it for Australia.

We got out to the good balls

“It’s not necessarily the pace but where the ball is and the plans they’ve had have worked well,” he told a BBC podcast. “Even me as a No.11, you get used to that pace. I honestly don’t think the pace has actually caused us any issues. If you look at our dismissals, we sometimes haven’t necessarily got out to the good balls.”

Anderson backed up his point by mentioning about facing Kagiso Rabada at home when South Africa toured England earlier this year. Anderson believes that Australia lack in depth and have no one other than the current pace trio.

“They’ve had three bowlers who all can bowl 90 miles an hour and they’ve stayed fit for three games, but you look beyond that and they’ve got problems,” Anderson said. “(James) Pattinson’s injured. (Nathan) Coulter-Nile is injured. They haven’t got much other than these three.”

Anderson has been England’s most successful bowler in this tour. He has picked 12 wickets at over 25. The fourth Test will begin on December 26. 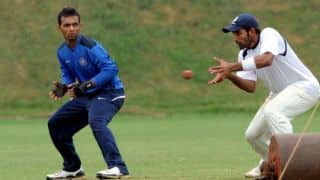