The Australians romped to an emphatic 10-wicket victory early on the fifth day in Brisbane. His field strategy for Smith was likened to Bodyline, a bowling tactic devised by England on their 1932-33 tour of Australia.

Joe Root has urged his players to keep backing themselves as Ashes holders England head into a crucial second Test after their demoralising loss to Australia at the Gabba. The Australians romped to an emphatic 10-wicket victory early on the fifth day in Brisbane after breaking free of an attritional opening three days, leaving questions for the tourists over the remaining four Tests. England’s inability to capitalise on a strong start in the first innings, where they crashed from 246 for four to 302 all out and a below-par 195 in the second innings cost them any winning chance in Brisbane.

“We’ve got to keep believing and trusting the work we’ve been doing, and backing ourselves and backing each other as a group,” said Root, on whom much depends with the bat and team strategy.”For three days we played some excellent cricket. Unfortunately, when we got into good positions, we didn’t quite capitalise on it.”The series now heads to the Adelaide Oval for the first-ever day-night Ashes Test, starting on Saturday, where England cannot afford to lose again.

Root defended his elaborate fielding placements at the Gabba for Australia’s Steven Smith, who turned the Test with a painstaking unbeaten 141 over eight-and-a-half hours to give his side a narrow but crucial innings lead. to counter the great Don Bradman. The England skipper placed six fielders on the leg-side with three in the deep and no one in front of the bat on the off-side as his pacers ripped in short-pitched deliveries to Smith for a time.

“We made him (Smith) work extremely hard for his runs. Credit to him, he played extremely well,” Root said.”Sometimes you’ve got to say well played to the opposition.”Root, ranked the world’s second-best Test batsman, was out leg before wicket in both innings at the Gabba for 15 and 51, but is confident of making big scores in the rest of the series.

“I feel like I’ve got a good understanding of how I play and I’ll make sure that I prepare very well in terms of getting ready,” Root said. England coach Trevor Bayliss said he was confident the tourists will bounce back.”Adelaide? I don’t think there will be any problem at all,” Bayliss said.

“Unfortunately, we’ve been in this situation before over the last few years where we’ve put in a bad performance but we were able to come back from it.” 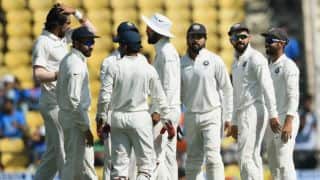 India 2 wickets away from defeating Sri Lanka in Nagpur Test 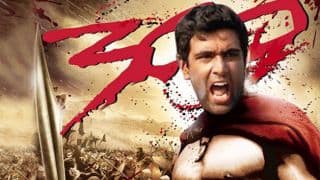