England’s Jonny Bairstow has recently been accused of head-butting Australian opener Cameron Bancroft. The incident reportedly occurred ahead of the first Ashes Test at Brisbane. The incident stirred a controversy after England’s 10-wicket defeat in that Test. ECB Director Andrew Strauss enforced a midnight curfew on the team. In the post match press-conference, Bancroft clarified that it was a friendly gesture from Bairstow (though the explanation left Steven Smith in splits). Smith’s English counterpart Joe Root was not pleased with Australia’s reaction to the incident. Ahead of the Perth Test, Bairstow opened up on the head-butt controversy. He wrote about that in his column for Daily Mail.

“A headbutt, to me, is something that has malicious intent. I think that’s the dictionary definition. And that’s certainly not what happened between me and Cameron Bancroft when we met at the very start of the tour. The reality is that it was nothing.

“Our security were there and happy nothing happened. Sorry, if I had headbutted someone I think they would have known all about it and damage would have been done. How can I describe it? Boys being boys, I guess. But there was minimal contact, I can tell you that.

“No offence was taken and, talking to some of the Australian boys, they didn’t know anything about it until just before some of their players made comments to me about it during the Test at The Gabba. Those comments were picked up by a stump microphone and suddenly it had snowballed.”

“Did I feel as if I had been stitched up? Yes I did in many ways, but at the same time I honestly never thought of it as anything to worry about. I knew I hadn’t done anything wrong and, more importantly, the team and management knew that too.

“Australia, as they have admitted, were trying to use it to get under my skin. Realising what they were doing was important. I never said a thing back to them. Even that picture of me talking to Peter Handscomb in the middle painted the wrong picture. He was just asking, ‘What was going on?’ It did get to me a bit when they started sledging me because I didn’t know what they were talking about. But I can honestly say the shot I got out to in the second innings had nothing to do with it.

“I played a bad shot. You have to take a few risks when you’re batting with the tail and the truth is I had forgotten they had a third-man.”

“Some other things, apart from the ‘headbutt’ business, were said by Australia in the middle but what they were is staying there. We move on. Hopefully it’s gone now. I’m not making an issue of it. Only if they are said again would the matter go further. We just need to get on with trying to get back in this series.

“The second Test was played in a good spirit, tough but fair. There were some verbals from both teams but this time nothing crossed the line. Clashes like we saw in Adelaide are part of sport.

“You think when England played Australia last week in the rugby league World Cup final there weren’t words said? You have elite sportsmen doing their utmost to win a huge series. There are going to be frustrations and flashpoints. But if we were the type of people who shrink from conflict and a battle, we wouldn’t be here.

“Remember, there are three members of the Australian side who have been team-mates of mine at Yorkshire Handscomb, Mitchell Starc and Shaun Marsh and we get on very well off the field. I had a good chat to Mitchell after the second Test and we leave what has gone on during the matches out there. I’ve not lost any friendships over the last couple of weeks, put it like that.”

England are trailing the series 0-2. The third Test at Perth will start from December 14. 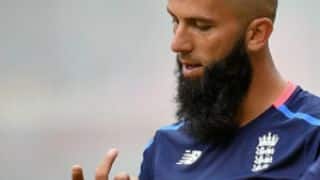