Jonny Bairstow was under investigation for being involved for headbutting Cameron Bancroft at a bar in Perth. It took place ahead of the opening warm-up match against Western Australia XI. Although no one was hurt, that incident is said to have sparked heated confrontations on the field between Australian players and Bairstow, while he was batting in the second innings of the first Test in Brisbane.

When Bairstow was confronted by ECB to understand the incident, he played it down. Bancroft, during the press meet with Steven Smith, explained in detail about the incident.

‘I was expecting a handshake’

I got into a very amicable conversation with Jonny, he just greeted me with a headbutt. I was expecting a handshake. It wasn’t the greeting I’d expected. We continued on having a very good conversation. At the time he said sorry. For me personally it was just really weird. It was so random and I didn’t really expect it. A handshake or hug would have been something more I would have expected. I just took it as, ‘he says hello to people very differently to others’.

‘I was trying to get at Jonny’

As Smith laughed it off, he agreed the incident was picked up on the field intentionally to unsettle Bairstow, I was trying to get at Jonny … He got out at third man, it was a pretty ordinary shot. We were just trying to get into his head and I think it worked.

‘There was no intent or malice’

Bairstow felt the matter was blown out of proportion, We were just in the bar having a good laugh. Cameron and I enjoyed the evening and continued to do so. There was no intent or malice. Hopefully now we can sweep this under the table and continue what will be an exciting, fantastic series. 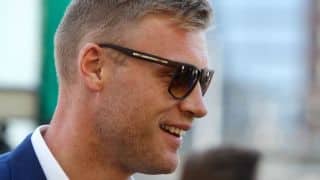