Australia paceman Josh Hazlewood has warned Joe Root‘s England tourists and their raft of Ashes debutants they risk being exposed if their big guns don’t fire in the coming series. England s depleted squad touched down in Perth on Sunday without suspended star all-rounder Ben Stokes. Their arrival coincided with Hazlewood’s Test pace partner Mitchell Starc picking up a career-best eight wickets with the pink ball in a Sheffield Shield match in Adelaide. The world number two’s inexperienced batting line-up has been highlighted as its biggest weakness as it aims to emulate the feat of Andrew Strauss’ men by becoming only the second England team to retain the Ashes urn in Australia in 31 years.

While doubts remain about the security of Australia’s top six batsmen, there is an air of confidence among their bowling attack heading into the opening Test at the Gabba on November 23.”If you get him (Root), Alastair Cook and Jonny Bairstow, who have been scoring runs the last few years, it places extra pressure on the inexperienced guys even more so,” Hazlewood told Fairfax Media.”If we get the wood on them hopefully the rest fall in line.”

Only Root, Cook and Bairstow have played a Test in Australia, while Gary Ballance was dropped during the last Ashes series and James Vince, Mark Stoneman and Dawid Malan have played a combined total of 17 Tests without scoring a century. Root, rated the world’s second-best Test batsman, shapes as the key wicket for Australia despite a horror campaign in 2013-14 when he passed 50 once in eight innings and was then dropped.”He’s a pretty good all-round player, you don’t get to the top couple for no reason,” Hazlewood said. “He seems to be scoring quicker at the moment as well, at 80 strike-rate, the last 12 months.

“He’s definitely getting on with it so hopefully that gives us an extra couple of opportunities. He’s got a pretty well-rounded game at the moment.” Starc’s best first-class figures of his career could not have come at a better time, but will also be welcomed by the England seamers, particularly Stuart Broad. Broad is expected to be a handful at Adelaide Oval when the tourists play their first day-night Test in early December.

“It s been a long time since I ve played a four-day fixture so it was nice to get some overs under the belt (37.4 for the game) and get ready for that first Test,” a fit-again Starc said on Sunday.”The ball swung and nipped a little bit and I managed to get it to move both ways and find a way to get a few wickets.” 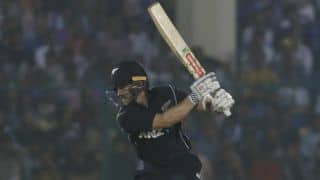 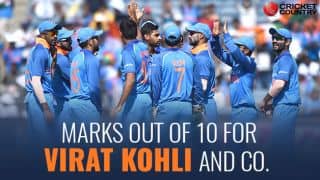