The Ashes 2017-18: Australia are just a wicket away from regaining the urn.

Australia have been focused ever since the Ashes 2017-18 commenced. They have been put in a spot by England, but time and again, redeemed themselves from thereon. As a result, they are 2-0 up and need only a win to regain the urn. However, the national selectors surprised everyone by including Mitchell Marsh in the 13-man squad for the Perth Test; starting from December 14. Will hosts change a winning combination? If they do so, what will Marsh bring into the side? Former opener and Western Australia coach, Justin Langer opens up on Marsh’s resurgence and how he impressed with his all-round abilities and leadership skills during his comeback trail.

“Australia are 2-0 up in the Ashes, I never like to change a winning team (in Perth). That said, if there’s any concerns about any of the bowlers and if the wicket looks anything like what we’ve played on in the last two Shield games here then you’d definitely like to have another fast-bowling option I think. Because spin-bowling doesn’t usually have the impact here as it does other grounds. So maybe Nathan Lyon won’t have the same impact he’s had in Adelaide and Brisbane.”

‘Mitch is going from strength to strength’

“Mitchell Marsh, like a lot of young players, you get in early then part of the journey is you get dropped. Then you’ve got a choice to make, you can either fade away or get better. The last three months he’s probably scored 1000 runs for Western Australia – if you look at the JLT Cup, he was unbelievable. His presence at the crease, like his brother, was sublime in the one-day tournament. He’s come out, got 400 or so runs in Shield cricket so far. He’s got 190 here at the WACA where the Test match is, so he is going from strengths to strengths.”

“He’s also captain of Western Australia now, showing great leadership and doing a very good job of that. And he’s bowling again, so you can understand it’s zero surprise to me, as it has been throughout his whole career, that he is an attractive player for the selectors. It’s a no-brainer really. Whether he forces himself into the team, time will tell. From an absolutely biased Western Australia cricket coach point of view, I hope he does but it means someone will have to miss out – and probably nobody deserves to miss out when they’re 2-0 up time will tell, but he has certainly done everything he can to knock hard to get into the team.”

Really impressed with him strategically

“Mitch has probably exceeded expectations actually, he’s really taken it on. I knew he’s a very popular person. And sometimes leadership isn’t a popularity contest – and he’ll keep growing into that, but I’ve been really impressed with him strategically on the field.

But he’s seen a lot of cricket, he’s been in cricket change rooms almost literally since he was born. He’s seen a lot of cricket, and I should probably have never underestimated that, but he’s strategically very good. And he’s been excellent on and off the field. The captaincy and leadership are going to be a big part of his re-emergence in international cricket”, concluded Langer. 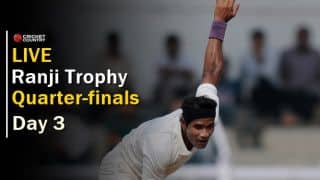