In what was boiling as a perfect Test for England, rain played spoilsport to enforce early stumps on Day Four of the penultimate Ashes Test versus Australia at MCG. Resuming from 491 for 9, England couldn’t add anything to the overnight score. Nonetheless, Alastair Cook registered the highest score by virtue of carrying his bat. He remained unbeaten on 244, and England tightened their screws over Australia.

Trailing England by 164 runs, Australia lost Cameron Bancroft and Usman Khawaja early. The duo have been in poor form barring few decent knocks. However, Australia have their hopes pinned on captain and vice-captain Steven Smith and David Warner and rain to bail them out. They have added an unbeaten 38-run stand for the third wicket, and will be put to test against James Anderson, Stuart Broad and Tom Curran. England will be eager to get off the mark in the scoreline before the final Test at SCG. 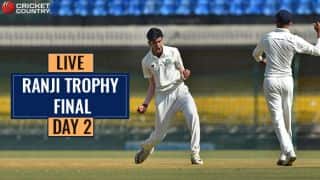