Joe Root for the fourth time was unable to convert his starts into big innings as he was dismissed for 83 on Day 1 of the fifth and final Ashes Test at SCG in Sydney. Root was out for a superb diving catch by Mitchell Marsh at square leg. Root haunched in dismay after missing out a century. Root and Malan recovered England‘s first innings with a 133-run stand after the tourists had slumped to 95 for three after Alastair Cook’s dismissal. Malan notched up half-century after surviving a run-out attempt and a catch by Australian skipper Steven Smith. At the close of Day 1, England were 233 for 5 with Malan unbeaten on 55. Meanwhile, Bairstow was dismissed by Josh Hazlewood for 5 before the day ended. 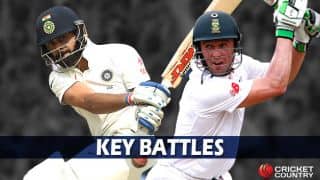