The cricketing fraternity is eagerly awaiting for The Ashes 2017-18 to kickoff. The first of the 5 Tests is scheduled at Brisbane on November 23. As England and Australia prepare hard for the Tests, Mitchell Starc is eyeing to repeat Mitchell Johnson‘s heroics from 2013-14. Johnson had tormented England throughout that series. His 37 wickets came at 13.97. If that was not enough, Ryan Harris got his 22 wickets at 19.31 and Peter Siddle his 16 at 24.12. Not only did Johnson & co help Australia regain the urn, they flattened England 5-0; there is no doubt they will be eager to pull off a similar performance.

Starc is coming fresh after a long layoff due to injuries and rest. He will be eyeing to run through an inexperienced England top-order. Starc is more than confident of him and his co-fast bowlers. “This time we’ve got a few guys who can bowl pretty quick and bowl some good bouncers, and we’ve got a really solid attack who complement each other. If it’s not me. You’ve got Pat Cummins bowling fast bouncers. You’ve got Josh Hazlewood bowling consistent line and length … so much like that attack did when Jono [Johnson] took all those wickets. I think we complement each other really well. You throw in Jackson Bird. [Nathan] Coulter-Nile’s bowling well, so five really good guys there; Patto [James Pattinson] if he’s fit to go”, Starc told ESPNCricinfo. “We’ve got a really good attack there. It’s not down to one person: everyone will like to bowl like Jono and terrorise the Poms like he did and take a thousand wickets in a series, but the great thing for us is we’ve got a young group that complement each other really nicely.” 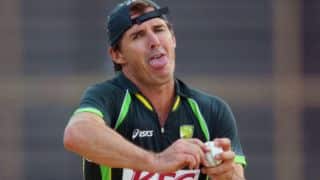