Australia lead the best of five Tests series 2-0 with three to play.

A British newspaper has claimed to have exposed attempts to fix the third Ashes test between Australia and England. Two bookmakers allegedly offered to sell details of rigged periods of play which could be bet on to win huge sums, The Sun reported on Wednesday. The newspaper said their undercover reporters were asked for up to 140,000 ($187,000, 158,000 euros) to ‘spot fix’ markets such as the exact amount of runs scored in an over.

“Before match. I will tell you this over, this runs and then you have to put all the bets on that over,” one of the bookmakers was quoted as saying. Asked if it was a good source he said: “Absolutely correct information.”

The Indian pair — secretly filmed at hotels in Dubai and Delhi during the paper’s four-month investigation — said corrupt players signal the fix is in by making a subtle gesture on the field, such as changing their gloves. Spotters in the crowd then tell bookies who put millions of bets into the illegal Indian betting market.

One of the bookmakers claimed to have worked on the scam with former and current internationals including a World Cup-winning all-rounder. No Australia or England players were named as being involved by The Sun.

But with play in the third Test due to get underway in Perth on Thursday, cricket chiefs pledged to look into the allegations.

The International Cricket Council said The Sun’s revelations were of “grave concern”, adding: “We take all allegations of corruption seriously and welcome The Sun’s offer to share this information.”

Australia lead the best of five Tests series 2-0 with three to play. 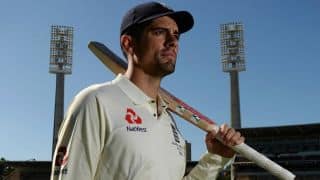