The Australian selectors are mulling over Peter Handscomb and Mitchell Marsh.

Steven Smith says he is leaning towards playing all-rounder Mitchell Marsh as Australia‘s fifth bowler in Thursday’s potentially Ashes-deciding third Test against England in Perth. Smith declined to finalise an Australian XI at his Test-eve media conference Wednesday as selectors mull over the merits of struggling batsman Peter Handscomb and local star Marsh. Handscomb’s place is under threat after a total of 62 runs in three innings in the series after a difficult Adelaide second Test in which his batting technique came under the microscope.

If recalled, it would be the first appearance for Marsh since a shoulder injury mid-way through Australia’s Test series in India earlier this year. His chances have improved through his ability to provide a fifth bowling option to support Australia’s pace attack on what is expected to be a flat WACA wicket.”If we do go down that route it’s purely for the reasons we think we need an extra bowler on this wicket, nothing to do with anyone’s batting,” Smith said.

“The stats suggest over the past couple of years that bowlers have had a pretty heavy workload out on this wicket. We re probably leaning down that way at the moment. It will depend on what we think the wicket’s like tomorrow and if it is going to be hard and fast and bouncy, that might change our thinking. England, rattled by off-field booze-related incidents, face the prospect of losing the series in Perth where they have not beaten Australia since 1978. They were heavily defeated in the opening two Tests in Brisbane and Adelaide.

Smith admitted that changing a winning team while leading 2-0 in the five-Test series would be a tough call on Handscomb, who averages 47.35 in his 12 Test appearances. Despite criticism of Marsh’s consistency at Test level where he averages just 21.74 in 21 Tests, Smith said he has seen signs in his recent batting to suggest he’s a changed player.”He’s tightened up his defence quite a lot,” Smith said.

“I know speaking to him when he was back in the team a little while ago, we spoke about softening your hands up in defence and those good length balls, not going so hard at them. I’ve seen that watching him the last couple of days in the nets and watching some of the Sheffield Shield games, that in defence he has actually softened his hands up. He’s still putting away the bad ball. He hits the ball as hard as anyone I’ve ever seen. He’s a strong lad.”

Smith said the groundsman had been working to get more pace into the WACA wicket ahead of the Test.”I think he’s got more grass on it than he previously has to try and get that pace on the wicket,” he said. 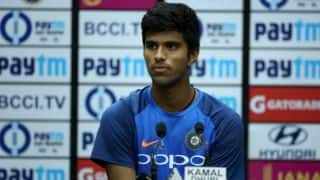