"Just go back to the basics, go back to Shield cricket, focus on some of the things he focused on before when he'd been successful and be patient."- Ponting

Australia excluded Matthew Renshaw for the 2017-18 Ashes, drafting the 21-year-old Cameron Bancroft as David Warner’s opening partner. Renshaw, who scored 70 runs off six innings in Sheffield Shield, has not been in his elements of late. On the other hand, Bancroft s 111 caught the selectors’ attention. Renshaw confessed his disappointment but calls it a fair decision.

“I’m pretty disappointed to be honest,” Renshaw told News Corp. “The selectors called me. We had a chat. They said I simply didn’t score enough runs, which is fair enough. I’ve been feeling good, but I just haven’t been getting runs on the board.”

Ponting, who made his debut in December 1995, had scored 96 against Sri Lanka at Perth. He, however, was dropped from the side within a year. It took Ponting close to four years to cement his spot in Australia’s Test squad. He suggested Renshaw to not stress about it and refocus on the Baggy Green he got last summer.

“The thing I learned most was not to be in too big a rush to get back there,” Ponting told cricket.com.au.

“Funnily enough, the harder you try to push something like that and the faster you make things happen the longer it takes. That was a lesson that I learned from it.

Just go back to the basics, go back to Shield cricket, focus on some of the things he focused on before when he’d been successful and be patient. It’ll come back for him, I’m sure.”

Queensland s next match will be played at Perth, on Friday, against Western Warriors. 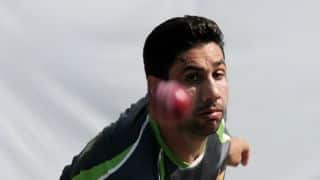 Ehsan Adil: Have always put in highest quality of effort while playing any form of cricket