England trail Australia by 413 runs at stumps on Day Two of the second Test at Adelaide Oval.

Prior to The 2017-18 Ashes, Ricky Ponting had made a bold prediction of a 4-0 scoreline in favour of the Australians, and only seven days of action continues to hold him in good stride as Australia are 1-0 up. Ponting further added that he is not impressed with England, and they are heavily reliant on their senior pros who are ‘just hanging in’.

“England haven’t done anything to impress me yet. Everyone talked about how even the first Test was but it actually wasn’t. Australia won by 10 wickets having lost the toss and the wicket was nowhere near like a Brisbane pitch. They got an England pitch for the first three days and they survived and held on because of the conditions.

But as soon as they hardened up and got quicker England were found wanting and found wanting badly. The same thing here. They won the toss, they got the conditions that they wanted; a grassy pitch, overhead conditions. (Stuart) Broad and (James) Anderson, as good as they’ve been, they lacked that impact on the game. They continue to bowl well but they just haven’t got the impact to knock over the best players right now and the guys behind them (Chris) Woakes, (Jake) Ball up there in Brisbane, (Craig) Overton here have been steady but not good enough.”

‘Adelaide is their best chance’

“I said before the series 4-0 but I also said Adelaide was (England’s) best chance of winning a game and if they’re going to do that from here they’re going to have to play some pretty good cricket.”

Anderson has taken just 3 wickets in as many innings at 50.33. Broad is taking a wicket in every 13 overs, while former captain Alastair Cook has produced scores of 2, 7, and is unbeaten on 11 at stumps on Day Two in Adelaide.

‘It gets harder and harder’

“They (Anderson, Broad and Cook) rely on too few and the few they rely on are past their best. Cook has made 11,000 Test runs and (played) 140 games but having been there and done it, it’s really hard to improve as a player. You’re trying to hang on and maintain the standards you’re used to for a long time but it gets harder and harder to do that.”

If you look at Cook’s last 6-12 months he got 240 in a Test against the West Indies over there and that made his whole summer look a whole a lot better than it was. I think he’s just hanging on and the other two (Broad Anderson) are the same. They’re going to need to unearth something pretty special.”

“The fact that (Ben) Stokes is not there is a huge hole in their side. A lot more pressure now comes back on Joe Root as the captain. He knows he now has to score huge runs for the rest of the series if they’re going to be competitive. I said at the start there are a lot more chinks in their armour than I thought there was in ours.” 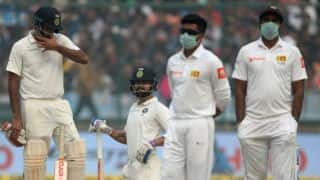 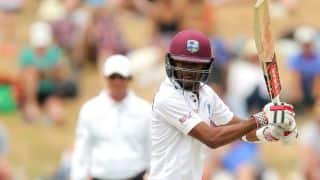