Rival captains Steve Smith and Joe Root were critical of the lifeless Melbourne pitch after the fourth Ashes Test on Saturday, only the second draw in the showpiece Boxing Day Test in 20 years.

Rival captains Steve Smith and Joe Root were critical of the lifeless Melbourne pitch after the fourth Ashes Test on Saturday, only the second draw in the showpiece Boxing Day Test in 20 years.

The drop-in pitch at the Melbourne Cricket Ground was unforgiving for bowlers, with a total of 1,081 runs scored and only 24 wickets taken over five days.

The flat, unresponsive pitch drew a barrage of criticism, with claims it was not a worthy wicket an occasion as big as a Boxing Day Ashes Test match.

Australia skipper Smith, who scored an unbeaten 102 on the final day to play out for the draw, said something had to be done about the state of the MCG pitch.

“It hasn’t changed over five days and I’d say if we were playing for the next couple of days it probably wouldn’t change at all either,” Smith told reporters.

“It’s got to find a way to have some pace or bounce or take some spin or do something,” he added.

“Obviously we saw a reasonable amount of reverse swing throughout the game but the ball just gets so soft so quickly because the surface is quite hard and it’s really difficult to get people out.”

Smith said he didn’t think the wicket was “good for anyone”.

“I think as a player you can only respond to what’s there in front of you,” he said.

“I think we did that. Obviously, you want to see results and go out and win games. Unfortunately, we weren’t able to do that this week.”

Opener Alastair Cook, who carried his bat in a marathon unbeaten 244 in England’s only innings, said Saturday’s draw went against the trend in world cricket.

It was England’s first drawn Test since playing India in Rajkot over a year ago.

“There’s less draws in Test cricket nowadays than there’s even been,” Cook said.

“I am pretty sure that the groundsman would have liked the pitch to deteriorate more than it did, if it starts as flat as it does, you always want it to deteriorate end of days three, four and five,” the former England captain added.

Cricket Victoria chief executive Tony Dodemaide said it might be time to dig up the much-maligned MCG wicket and start again.

“It might be that the life span of a particular drop-in pitch might be shorter than what we saw for the pitches that were all-year round,” Dodemaide told ABC Radio. 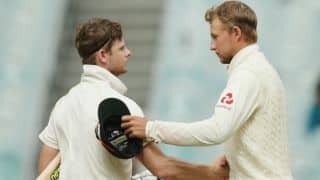 Steven Smith: Could have batted for another hour at MCG 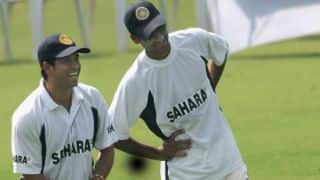