Steven Smith's century in his 57th Test match left him with a career batting average of 61.23.

Brisbane: Former Australian Ricky Ponting believes Steven Smith has the potential to finish his career among the modern greats. Ponting’s comments came after Smith notched up his 21st Test century on the third day of the opening Ashes Test against England at the Gabba, Brisbane. Smith’s scorching century in his 57th Test match also left him with a career batting average of 61.23. And Ponting feels that the current Australian captain is completely on track to become the greatest batsman of the modern era.

“21 centuries in 57 games, he’s well and truly on track to do that. When you look at the way he went about it yesterday, he was just completely unflappable. He didn’t get out of his bubble at all, through the course of that innings, which says a lot about him,” ESPNcricinfo quoted Ponting, as saying. Emphasizing that Smith has already reached halfway of what other great players have achieved by the end of their career, Ponting said the 28-year-old was hungry to lead his team well and that he wanted to be the best player in the world.

“He’s got a game now that is standing up to the best attacks in all conditions, all around the world. If he keeps trending the way he is, then absolutely,” Ponting said during an interview to leading Australian radio.”Think about the greats – the Tendulkars and the Kallises and these guys that have scored 15,000 and 13,000 runs, but they played in 150-plus Tests, Tendulkar 200 Tests, to achieve what they achieved. He’s nearly halfway there in just over 50 Test matches,” he added. Ponting, however, revealed the one thing about Smith’s approach which he would like change.

“I still wish he’d bowl a few more leggies every now and then as well. Because he can bowl those and bowl those well,” the former skipper concluded. Smith began his career as a leg-spinning all-rounder, but he made a significant change to his game-adding preliminary movement to his technique, while batting in Perth during the 2013-14 Ashes series.

Since then, he has been averaging 72.09 and amassed 5,511 runs in the longest format of the game. Smith will now aim to continue his good form when Australia head into the second Ashes Test against England, beginning December 2 at the Adelaide Oval. 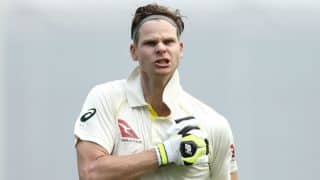