Australia have regained the Ashes after defeating England at Perth.

Australia have regained the Ashes after defeating England at Perth. England are still to register a victory in the ongoing edition. They had their moments but failed to capitalise on it. Having won the series with two games to spare, the Australian team is relaxed claims Josh Hazlewood.

“We can relax a little bit, with the series won, but hopefully our best comes through now,” said Hazlewood.

“Watching the last time the Aussies went 5-0 [in 2013-14] and a couple of times before that it’s good to watch and hopefully to replicate it this year.

It’s been good start, and now we have two games to go.”

Hazlewood has taken 15 wickets in the series so far. Mitchell Starc will miss the Boxing Day Test due to injury which will add more responsibility to his partner. Hazlewood, however, thinks it won t be a concern as England have had many batting collapses in the series till date.

It’s about grinding out and getting those first four

“I think that has been one of the big differences, our middle to lower order has wagged a fair bit, especially Pat Cummins and Tim Paine as well,” Hazlewood said.

“We know if we get them four or five down we can really go through that bottom half pretty quickly on any wicket.

“We don’t really need much in the wicket to take those last six. It’s about grinding out and getting those first four or five, doing our work there, then reap the rewards later on,” he concluded. 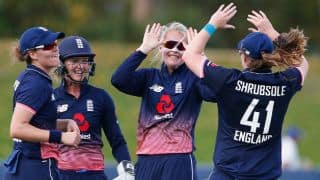