Australia's Josh Hazlewood took five wickets as England collapsed to 67 all out on the second day of the third Ashes Test.

Australia‘s Josh Hazlewood took five wickets as England collapsed to 67 all out on the second day of the third Ashes Test at Headingley on Friday. In a match they had to win to square the five-Test series at 1-1, England arrived at Yorkshire’s headquarters having dismissed Australia for a seemingly modest 179, with fast bowler Jofra Archer taking 6/45, on Thursday.

But with Hazlewood returning figures of 5/30, England were bowled out inside 28 overs to leave Australia with a first-innings lead of 112. Joe Denly, with 12, was the only England batsman to reach double figures, with their total seven fewer than the 74 scored by Australia’s Marnus Labuschagne, in for concussed star batsman Steve Smith, on Thursday.

But whereas Labuschange and David Warner (61) fought hard during their partnership of 111, few England batsmen showed anything like the same willingness to sell their wickets dearly, with several playing key roles in their own dismissal for all Australia’s good bowling.

England’s slump was no great surprise, however, but rather the latest in a line of recent Test collapses that have seen them dismissed for 58 by New Zealand (Auckland 2018), 77 by the West Indies (Bridgetown 2019) and 85 by Ireland at Lord’s last month. But what made this collapse all the more troubling was that the blue and sunny skies above Headingley on Friday ought to have made conditions for batting easier than the gloom of Thursday, when England captain Joe Root won the toss.

World Cup-winning opener Jason Roy took guard having made just 40 runs in four innings this series. He fell for nine in familiar fashion when he edged a drive off a wide Hazlewood ball to Warner, holding the first of four catches at first slip.

Root out for a duck

Root, walked out to applause from his Yorkshire home crowd. England’s best batsman, was out for a second ball nought — his second straight zero after a golden duck in the second innings of the drawn second Test at Lord’s — when nicking a straighter Hazlewood delivery that seamed away to Warner.

Hazlewood had taken two wickets for no runs in three balls, with England 10/2. England were almost 10/3 when new batsman Denly was given out lbw to Hazlewood on nought by umpire Joel Wilson only to review successfully.

They were, however, 20/3 when Rory Burns was caught behind for nine by Australia captain and wicketkeeper Tim Paine after the left-handed opener’s gloved hook off a Pat Cummins bouncer. Allrounder Ben Stokes came into this match following an unbeaten 115 in the second innings at Lord’s.

But he all but gave his wicket away when he flat-footedly carved at a wide half-volley from recalled fast bowler James Pattinson he could barely reach, with Warner holding a fast edge high above his shoulder.

Denly fought hard only for his 49-ball stay to end when caught behind following an inexplicably extravagant drive off Pattinson. And 45/5 became 45/6 when Jonny Bairstow, like Root playing at his Yorkshire home ground, was drawn into edging a good-length Hazlewood ball with Warner holding another excellent catch.

There were ironic cheers from a capacity crowd when Jos Buttler got off the mark with a four through the covers off Pattinson that brought up England’s fifty. England, 54/6 at lunch, lost their seventh wicket off the first ball after the interval when Chris Woakes was caught behind off Cummins (3/23).

Archer hooked a four off Cummins before his ‘up periscope’ attempt to duck a Cummins bouncer also saw him caught behind. Hazlewood, appropriately, ended the innings when he clean bowled No 11 Jack Leach. 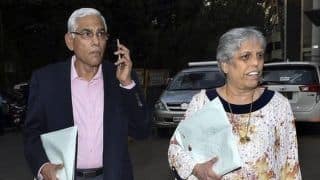