Archer took five wickets across the two innings, but it was his durability and ability to bowl at high speed even after a long spell stood out.

Jofra Archer has certainly lived up to the hype generated around him as he made a memorable Test debut at Lord’s that has given England a new belief, they can turn it around and even dominate Australia in the ongoing Ashes which they trail 0-1.

READ: The heart skipped a beat: Archer on Smith getting hit

Archer took five wickets across the two innings, but it was his durability and ability to bowl at high speed even after a long spell stood out. What made headlines though was his battle with Steve Smith who ultimately had to be substituted due to concussion after being hit on the neck by one of Archer bouncer.

Here’s what the world has been saying about England’s latest pace sensation:-

“Pace separates men from boys. When you have someone with that sort of pace you find out who really wants to play. This man will change the entire outlook of fast bowling in the modern era.” – Michael Vaughan

“I’d much rather have him on our side than anybody else’s. He has announced himself yet again, in a different format, and the sky is the limit for that kid.” – Ben Stokes

“He makes things happen when not many others in world cricket can. He has natural pace which is always going to be in the game on every surface.” – Joe Root

“Being out there is probably less nerve-wracking than being off the field,” – Marnus Labuschagne on facing Archer

“He just runs through his action with no massive bound and unleashes which makes it that much harder to know what he’s about to do. It’s like facing a bowling machine that had been set at 80 miles per hour when someone has just turned it up to 95 and not told you.” – Nasser Hussain in Daily Mail

“The sight of Steve Smith poleaxed… recalled the end of a boxing contest rather than a cricket match and Australia’s plans in this series have been thrown into disarray by Jofra Archer.” – Michael Atherton in The Times 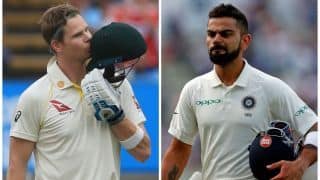 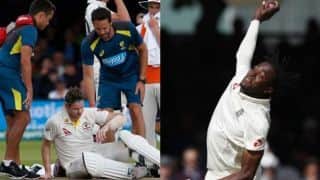 Ashes 2019: Yuvraj takes a dig at Shoaib Akhtar after Pakistani pacer criticises Archer for not checking on Smith